From Heraldry of the World
Your site history : Dunedin
Jump to navigation Jump to search 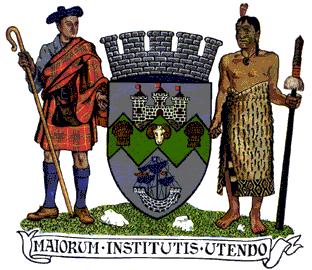 The castle is taken from the Arms of Edinburgh, from which the City of Dunedin takes its name. The green fess or stripe, across the middle of the shield represents the agricultural background of the Capital of Otago, with it's wool and mutton (the golden horned ram's head) and cereal crops ( the golden sheaves); the jagged nature of this stripe indicates generally the mountainous nature of Otago and in particular the three high hills that lie behind the City - namely Mounts Flagstaff, Swampy and Cargill.

The three-masted ship, or lymphad, flying the flag of Scotland, commemorates the arrival of the first Scottish Immigrant ships, the John Wickliffe and Philip Laing, in Otago harbour, whose bays and high surrounding hills are symbolised in the deeply indented lower border of the fess.

The supporters are a Scotsman, in honour of the pioneers of the Settlement, wearing the Cameron tartan, a compliment accorded by the Council to Sir Donald Cameron, who was Mayor at the time of the grant of Arms, and a Maori chief, from whom the land was purchased, symbolical of New Zealand.

The motto Maiorum Institutis Utendo means "By following in the steps of our Forefathers."