From Heraldry of the World
Your site history : Dzierżoniów
Jump to navigation Jump to search 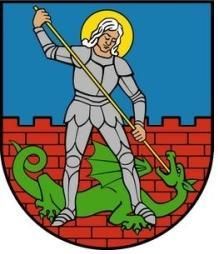 The arms of the city (former names Reichenbach in Schlesien and Rychbach) show the image of the local patron saint, St. George killing the dragon, in front of a city wall. The saint already appeared on the oldest seal of the city, known since 1303, the wall appeared around 50 years later.

Although the composition of the arms has not changed since, the colours have varied widely, see below: