From Heraldry of the World
Your site history : Ebingen
Jump to navigation Jump to search 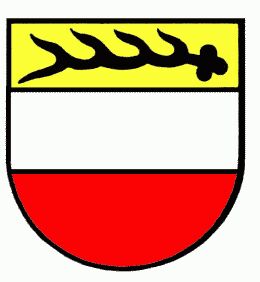 The arms were officially granted in 1938, but have been in use for several centuries.

Ebingen received city rights around 1250 from the Counts of Hohenberg. In 1367 it became a possession of Württemberg. The oldest seal, dating from around 1300, shows the arms of the Hohenberg family. Later seals and other images until 1605 only show these arms (divided horizontally, silver and red), see also Horb am Neckar. In the 16th century the deer antler of Württemberg was added in the upper part of the arms.