From Heraldry of the World
Your site history : Edmonton (London)
Jump to navigation Jump to search 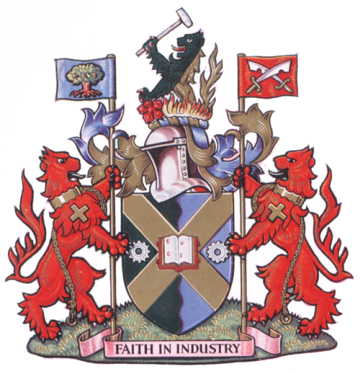 Arms: Per pale wavy Sable and Azure on a Saltire Or between two Cog Wheels in fesse Argent an open Book proper bound Gules edged Gold.
Crest: On a Wreath Or and Azure issuant from Flames of Fire proper a demi-Lion per bend sinister Sable and Or holding in the dexter paw a Sledge Hammer also proper and resting the sinister paw upon a Ciquefoil Gules.
Supporters: On either side a Lion Gules gorged with a Collar engrailed with the Chain reflexed over the back and charged on the shoulder with a Saltire couped Or supporting a Staff Gold flying therefrom a Banner the dexter Azure charged with an Oak Tree eradicated and fructed proper and the sinister Gules charged with two Seaxes in saltire Argent pomelled and hilted Or.
Motto: 'FAITH IN INDUSTRY

The black and blue background represents the division of the ancient parish of Edmonton, the western portion being the district of Southgate. The saltire refers to the Abbey of St. Albans which held the Manor of Edmonton and the book alludes to the Borough's literary associations, especially with Lamb and Keats.

The lion is from the arms of the old local family of Francis, while the cinquefoil stands for the family of Charlton, sometime Lords of the Manor. The lion holds a sledge-hammer symbolizing the vigour of Edmonton's industries, to which the cog-wheels also refer. The flames allude in particular to the gas industry.

The supporting lions are taken to typify courage and determination. One banner alludes to the ancient forests of the neighbourhood, and the other contains the seaxes from the arms of the Middlesex County Council. The saltires repeat that on the shield.