From Heraldry of the World
Your site history : Eiderstedt (kreis)
Jump to navigation Jump to search 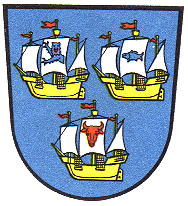 The arms are based on a seal dating from 1613, after the area was reclaimed from the sea. The ships represent the three areas (Harden) in the new territory; Eiderstedt, Everschop and Utholm. The lion is the symbol of Utholm, the fish for Everschop and the ox-head for Eiderstedt. On the original seal the ships were placed 1:2 instead of 2:1 and the symbols were placed on the hulk of the ship, not the sails.

The arms of Nordfriesland are nearly identical.