From Heraldry of the World
Your site history : Ekeren
Jump to navigation Jump to search 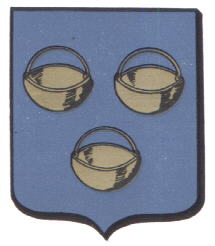 The arms show three brewing pots. The origin of the arms is not quite clear, but the arms are first mentioned in 1627. It is possible that the arms originally showed canting acorns or brewing kettles, from the word akers, which may have both meanings. Historically there have been many breweries in Ekeren. (The name, however, seems to be derived from the old name of the local river, Akerna)