From Heraldry of the World
Your site history : Elbląg
Jump to navigation Jump to search 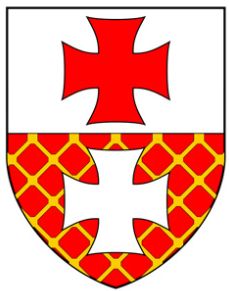 The arms of the city of Elbląg (former German name Elbing) show two crosses, which may be derived from the crosses of Gdańsk. The upper cross should be plain red, but I have no better image. The oldest seal of the city dates from 1242. The seal shows a person in a ship. Above the person there is a single cross.

The second and third seals also show a ship as the main symbol. On the ship there is now a banner with the two crosses. These seals date both from the 14th century.

Two later seals, made from the same stamp dating from 1424, show two different images. One shows again a ship with a banner with two crosses. The other side, being the smaller seal, shows a shield with two crosses held by an angel as a supporter. Whether the banner is derived from the arms or vice-versa is not known. Later 15 and 16th century seals show both images; the larger seals show the ship, the smaller the arms held by an angel.

In the beginning of the 19th century the angel was replaced by the Prussian black eagle and on the shield a crown is placed from which two ostrich feathers appear. At the end of the last century the eagle was no longer used. At present the city still uses the same arms, which were officially adopted in 1962.