From Heraldry of the World
Your site history : Emden
Jump to navigation Jump to search 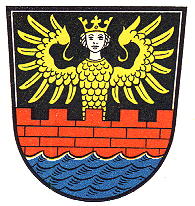 Emden became a city probably at the end of the 14th century. The oldest seal, known from 1427, shows a half-eagle and a letter E, above waves. The eagle is derived from the Tom Brook family, who ruled the city since 1413. It has been speculated that the letter E above the waves was already used as city arms before 1427. On a decorated stone in the main church in Emden there are two small shields vilisble, one with a lion for the Abdena family (who ruled the city before 1417 and after 1427) and one with a letter E and two waves.

In 1430 the eagle was replaced by the lion of the Abdena family, who had again acquired the city. The arms now showed in the upper part a lion and in the lower part two waves. Behind and above the shield there are the two patron saints of the city, St. Cosmas and St. Damian.

The Abdena family ruled the city until 1433. From 1433-39 it was a possession of Hamburg, then shortly of Ulrich Cirksena and again until 1453 of Hamburg. In 1453 the family became again a possession of the Cirksena family. On April 5, 1495 the ownership was finally settled by King Maximilian. A few months later, on August 10, 1495, the king also granted the city new arms. In between the city had simply used the two saints on its seals, dut to the changing ownership.

The arms appeared since 1504 on the seals of the city and have not changed since. However, there has been much discussion and many variations on whether the arms should have a crown, and which one. On the original document from 1495 there is a crown above the shield. But it is not mentioned in the description, most likely it was added as decoration. But during the centuries the city started to use all different types of crowns, as can be seen from the images below.

The arms are locally known as Engelke up de Mür, which means the Angel on the wall.

The harpy is also part of some arms in East-Frisian municipalities, as well as the Dutch city of Delfzijl (opposite to Emden).