From Heraldry of the World
Your site history : Enfield (London)
Jump to navigation Jump to search 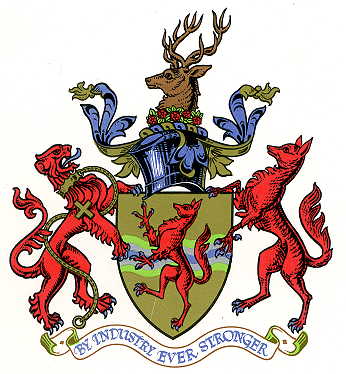 Arms: Or on a Fesse wavy Vert a Bar wavy Argent charged with a Barrulet wavy Azure over all an Enfield rampant Gules.
Crest: On a Wreath Or and Azure a Stag's Head proper wreathed about the neck with a Garland of Roses Gules barbed seeded slipped and leaved proper.
Supporters: On the dexter side a Lion Gules gorged with a Collar engrailed with Chain reflexed over the back and charged with a Saltire couped Or and on the sinister side an Enfield Gules.
Motto: 'BY INDUSTRY EVER STRONGER'

The green, silver and blue wavy horizontal bars represent the Borough's connection with the New River, the Green Belt areas and open spaces. The principal charge, as in the arms of the former Borough of Enfield , is a mythological heraldic creature, known as an "Enfield", which has the head of a fox, the chest of a hound, the talons of an eagle, the body of a lion and the hindquarters and tail of a wolf.

The stag's head and wreath of red roses are derived from the supporters of the Borough of Southgate, where the stags referred to the former forests and the red roses recalled the association with the Duchy of Lancaster.

Arms: Or an Enfield rampant Gules on a Chief Vert a Bar wavy Argent thereon a like Bar Azure.
Crest: On a Wreath Or and Gules a Stag trippant Or holding in the mouth a Rose Gules seeded barbed leaved and stalked proper.
Supporters: On the dexter side an Enfield and on the sinister side a Stag Or.
Motto: 'PRIORA COLE MELIORA SEQUERE' - Cherish the past but strive after even better things in the future.

The arms show the enfield as the main charge.

The green chief with silver and blue wavy bars represent the Borough's connection with the New River, the Green Belt areas and open spaces.

The stag refers to Enfield Chase, a former Royal hunting ground and the red rose to the district's association with the Duchy of Lancaster.

Literature : Images from the Enfield council and David Hale. Information from Scott-Giles, 1953 and the council.