From Heraldry of the World
Your site history : Erfurt
Jump to navigation Jump to search 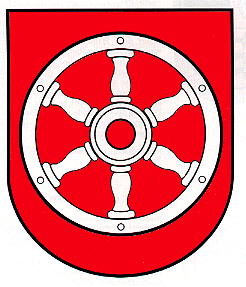 The arms of the city of Erfurt show a silver wheel in red; these are the arms of the State of Mainz to which the city historically belonged until 1802.
The wheel appeared for the first time as symbol of the city since the early 15th century. The oldest images showed a wheel with eight spokes, but already in medieval times it was changed to the six spokes that are still used.

The oldest seal of the city dates from the late 12th century and shows St. Martin, the patron saint of the archdiocese of Mainz in a gate. Several later seals all showed the saint in different positions. Only in a small seal from 1646 the wheel appeared for the first time. Only from the middle of the 17th century the main seals of the city showed the arms with the wheel.

When the city became part of Prussia in 1804 a new seal was made, showing the arms with the wheel. The shield was held by two savages (one male, one female) and above the shield was a helmet and as a crest a wheel with peacock feathers. A second seal with a similar design was made in 1843.