From Heraldry of the World
Your site history : Exeter
Jump to navigation Jump to search 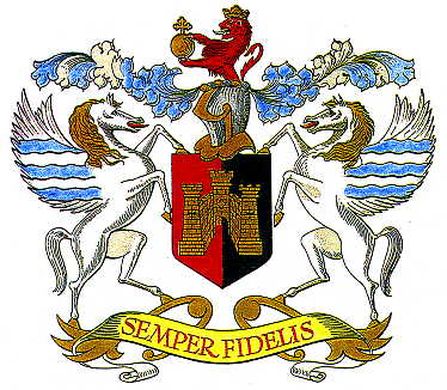 Arms : Per pale Gules and Sable a Castle triangular and triple-towered Or.
Crest : On a Wreath Or and Sable a demi Lion Gules ducally crowned and holding between the paws a Bale [Or banded Azure] surmounted of a Cross botonnée Gold.
Supporters : On either side a Pegasus Argent crined and unguled Or the wings [elevated] barry wavy of six of the first and Azure.
Motto: 'SEMPER FIDELIS' - Ever faithful

The arms were confirmed and the crest and supporters granted on August 6, 1564.

Exeter's arms are very ancient, and simply depict the long vanished Rougemont Castle. The distinctive form of the castle is described in the blazon as "triangular and triple towered". The red and black colouring of the field seems to have no significance. The shield was confirmed in 1564, and the crest and supporters were granted. The crest wreath is black and gold - the colours of the Duchy of Cornwall. The crest itself is a red crowned lion holding a golden orb. This is for Richard Earl of Cornwall, Holy roman Emporer. The same lion appears in the arms of Devon County Council and some of the towns and districts of Devon.

The supporters are winged horses or pegases. The wings are charged with blue waves and thus is represented the river Exe which once made the city a major port.

The motto is Semper Fidelis - the same as Queen Elizabeth I. It is said that the queen granted the motto to the city in 1588, as thanks for giving money to help build the fleet that defeated the Spanish Armada.