From Heraldry of the World
Your site history : Familleureux
Jump to navigation Jump to search 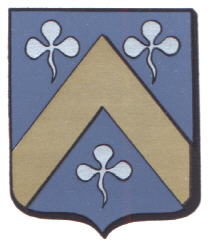 The arms were officially granted on September 1, 1932.

The village did not apply for arms in the early 19th century as was required by the Dutch King William I at the time. Also after the Belgian independence in the 1830s the village did not apply for its own arms. Only in 1932 the council applied for arms and, like many other small Belgian municipalities, simply applied for the arms of the last feudal lords.

The arms are those of the last Lords of the village, the Biseau family. The family acquired the village in 1716 and the last Lord of Familleureux, Charles de Biseau, died in 1806. The meaning of the family arms is not known.

The seal of the village is only known since the 18th century and showed the arms of the previous owners, the Lords of Maulde. They acquired the village in 1584 and owned it until 1716.