From Heraldry of the World
Your site history : Farum
Jump to navigation Jump to search 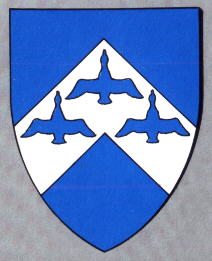 The arms were adopted in 1964 and officially registered in 1965.

The arms show a white chevron, which symbolises the channel between the Furesø and Farum Sø lakes in the municipality. The geese are chosen as the area was historically a royal hunting ground for geese. They also represent the three villages in the municipality, Farum, Bregnerød and Stavnsholt.