From Heraldry of the World
Your site history : Freudenstadt
Jump to navigation Jump to search 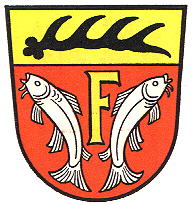 The town was founded in 1599 by Friedrich I of Württemberg as a village for (Austrian) miners on the main road from ulmUlm to Strassbourg (France). The town obviously grew fast as it became a city in 1600 and at the same time its own arms.

The letter F stands both for the founder as for the name of the city. Until 1950 the arms remained unchanged. In 1950 the fish were made of silver instead of gold as in the older arms.