From Heraldry of the World
Your site history : Fulham
Jump to navigation Jump to search 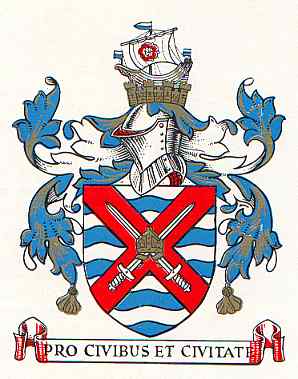 Arms : Barry wavy of ten Argent and Azure on a Saltire Gules two Swords in saltire points upwards of the first enfiled by a Mitre Or.
Crest : Upon a Mural Crown of seven Turrets Or an Ancient Rowing Ship in full sail Sable the Flags per fesse Argent and Azure charged on the Sail Argent with a Rose Gules surmounted by a Rose Argent barbed Vert and seeded proper.
Motto: 'PRO CIVIBUS ET CIVITATE' - For the citizens and the city

The waves stand for the Thames. The swords of St. Paul and the mitre are from the arms of the See of London, whose bishops held the Manor of Fulham since the end of the 7th century. In 879 a band of pirates assembled at Fulham, which is represented by the galley in the crest.

Previously the borough used the arms shown below; which showed a quartered shield with the first and fourth quarter showing the local area, the second showing the swords and the thirds the swords of Middlesex. These arms were not officially granted. 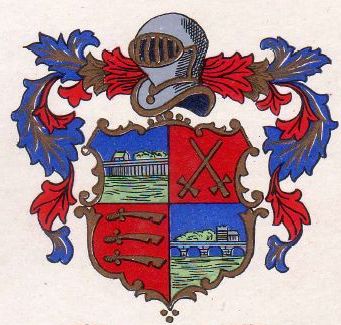