From Heraldry of the World
Your site history : Göppingen
Jump to navigation Jump to search 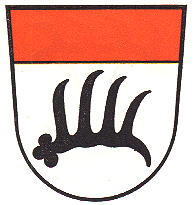 Göppingen was founded by the Dukes of Staufen in the 13th century. In 1319 the city was acquired by the Counts of Württemberg and has been part of Württemberg ever since. There are no seals known from before 1319.

The oldest known seal dates from 1338 and shows the deer antler of Württemberg, surrounded by balls, probably to distinguish the arms from similar arms. In the 15th century (known since 1473) the arms were changed to the present arms, however, the colours have changed regularly during the centuries. The present colours are known since 1535, but in 1595 the arms were shown in opposite colours and in 1605 of red and gold. The meaning of the colours is not known.

The addition of the smaller communities did not change the arms.