From Heraldry of the World
Your site history : Galmaarden
Jump to navigation Jump to search 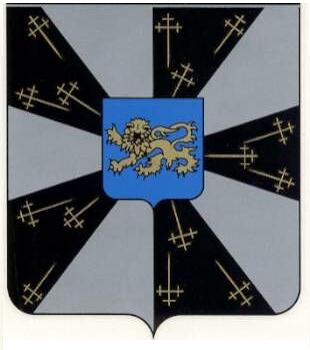 The arms were granted after the merger with the other municipalities on december 2, 1985.

The arms show the arms of the Lords of Enghien/Edingen with an escutcheon with a leopard. The latter is derived from the historical arms of Galmaarden. The arms of Enghien were used by Vollezele. The oldest known arms of a Lord of Galmaarden dates from 1280, for Walter de Braine, showed also the Enghien arms, as he was a descendant of the latter family. 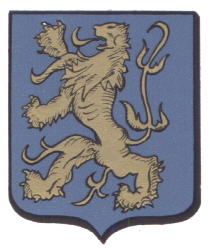 The oldest known seal of the local council dates from the late 14th century and shows a leopard. The later seals also show the leopard. Why the leopard was changed into a lion in 1818 (and again in 1908). The origin of the arms is not clear. Of the families that ruled the town from the late 14th century and later, many used a lion, but none a leopard. It is therefore likely that the arms are derived from the arms of the oldest Lords of Galmaarden, whose arms, unfortunately are no longer known.

On October 31, 1818 the arms with the lion were already granted, but with a small letter G in the upper right corner, which, however, was not mentioned in the blazon. The colours were the Dutch national colours, as in 1813 the mayor applied without indicating the colours. The arms were thus granted in the national colours. When the arms were confirmed after the Belgian independence, the colours were not changed.