From Heraldry of the World
Your site history : Grötzingen
Jump to navigation Jump to search 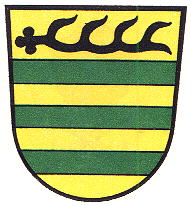 Grötzingen was the seat of the Lords of Bernhausen in the 12th century and received city rights in the early 14th century. In 1337 the city became a possession of Württemberg.

The oldest seal dates from 1377 and shows the deer (later deer antlers) of Württemberg. Later seals until the 18th century also show only the antlers. The city, however used since the 16th century the above arms, which show the bars of the arms of the Lords of Bernhausen, with one a single antler in the chief.

The arms were placed on the seals in the late 18th century and have not changed since. As the arms were not clearly defined, different variations of the arms have been used, with green or blue bars, and with different numbers of bars.