From Heraldry of the World
Your site history : Grumbach (Glan) > Verbandsgemeinde Grünstadt-Land > Grünstadt
Jump to navigation Jump to search 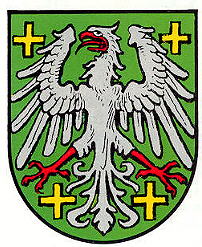 The former arms were officially granted on July 27, 1841. 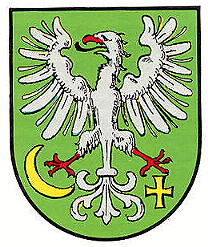 These were based on a wrong interpretation of the old seal, and showed a crescent and a cross in the lower corners of the shield. Even though the arms were officially granted in a canting green (Grün) field, the city used the historical blue colour until the 1880s, see below