From Heraldry of the World
Your site history : Grafschaft Bentheim
Jump to navigation Jump to search 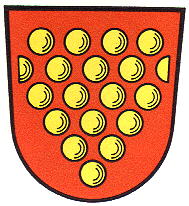 The arms are identical to the original arms of the Counts of Bentheim. These counts were very influential and ruled their territory from a mighty castle since the 12th century. In 1606 the county was split in two lines, Bentheim and Steinfurt. The present Counts of Bentheim still use the same arms.

The origin of the arms is unknown. The arms are also used in the arms of the towns of Bentheim, Neuenhaus, Nordhorn and the Dutch towns of De Wijk and Geldermalsen.