From Heraldry of the World
Your site history : Gravesham
Jump to navigation Jump to search 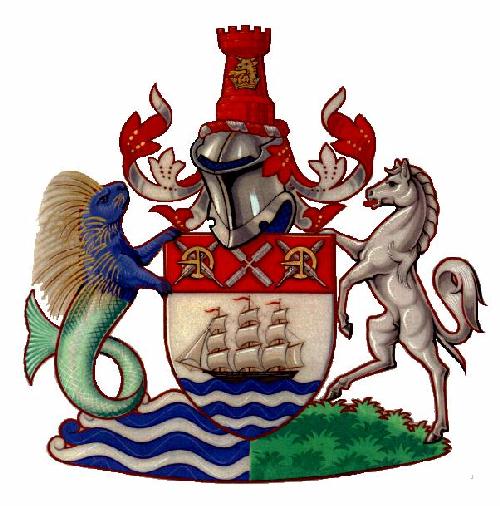 Arms: Argent upon Water barry wavy in base proper an East Indiaman in full sail with Pennons flying all proper on a Chief Gules the Sails of a Windmill proper betweem two Buckles Or each interlaced by as many Quill Pens in saltire proper.
Crest:On a Wreath Argent and Gules a Tower Gules charged with a Bull's Head issuing from a Ducal Coronet both Or and vomiting Flames of Fire proper.
Supporters:On the dexter side a Sea-Porcupine proper and on the sinister side a Horse Argent all upon a Compartment per pale of Waves of the Sea barry wavy and a Grassy Mount proper.

The shield consists of symbolic water on which an East Indiaman is in full sail. This is in reference to Northfleet and to Pitchers Dockyard there, where East Indiamen were built. It also brings forward the idea of commerce and trade with the World both past and present. At the top of the shield on a broad red band is placed the sails of a windmill for reference to the rural areas of the borough and crossed quill pens to indicate the association with Charles Dickens. These are interlaced through gold buckles inspired by the Arms of Gravesend which date from 1635.

The crest consists of the Tower of the Arms of Gravesend.

The supporter to the left (right to the viewer) is the white horse of Kent. To the left is a new heraldic mythical monster - a sea porcupine. This is inspired by the Arms of the Portreve of Gravesend. Beneath the Supporters is a compartment of symbolic water and green countryside to allude to marine interests of the area as well as its agricultural purpose.