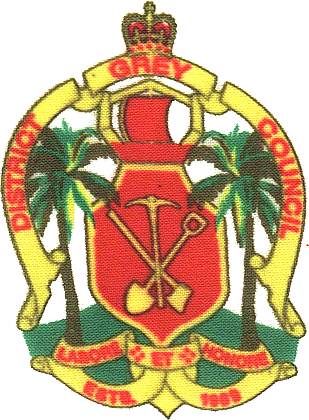 The axe represents the bushmen who are the world's best conservators as the District has one of the few most beautiful natural rain forests in the world The pick represents the goldminers who came from all over the world in the mid 1800s for the gold rush. The world's biggest nugget, The Roddy, was discovered here.

The shovel represents the coalminers who were the largest faction in local society here as the West Coast of the South Island is New Zealand's biggest coal producing area.

The ship represents the shipping port which was a very thriving port in the 1800s to mid 1900s. Now there is only a fishing fleet and barges take coal to other parts of New Zealand and some parts of the world.

The palm trees are Nikau palms and are indigenous to the West Coast. The crown represents the English sovereign who was and is head of state the country.