From Heraldry of the World
Your site history : Großauheim
Jump to navigation Jump to search 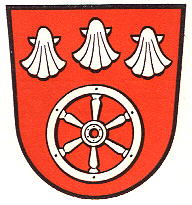 The wheel is the symbol of the State of Mainz, as the village was a possession of Mainz from 1425-1803. The shells are the symbol of St. James, the local patron saint since the 14th century.