From Heraldry of the World
Your site history : Haileybury and Imperial Service College
Jump to navigation Jump to search 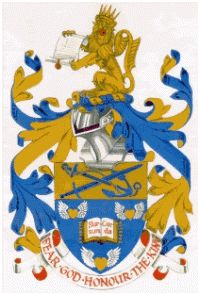 Arms: Azure, an open book argent bound gules edged and garnished with seven clasps gold and inscribed with the words "Sursum Corda" sable, the initial letters of the third, between three hearts Or, winged of the. second; on a chief also Or an anchor cabled and a sword, the point upwards, in saltire of the field.
Crest: On a wreath Or and azure, A lion sejant guardant erect, crowned with an Eastern crown Or, and hold­ing between the forepaws a scroll with the seal pendent therefrom proper.
Motto: Fear God, Hon­our the King

If you have any information on these arms and Imperial Service College mail us !