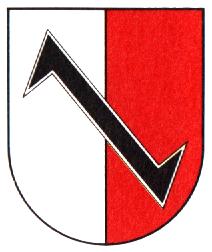 The red and white shield is identical to the arms of the former diocese and State of Halberstadt. The hook is a local symbol, with unknown origin. The oldest seal of the city dates from the first quarter of the 13th century and shows the image of St. Stephanus, patron saint of the diocese and the city. When the city became more independent of the bishops in the middle of the 13th century, the saint was removed. All later seals and images since show the above arms. The arms were probably officially granted in 1398, but the original document is lost.In the 19th century the city used the arms with a helmet, mantling and crest with two banners, see on the image of the seal below. These additions were never officially granted.

Use of the arms in the city