From Heraldry of the World
Your site history : Halesowen
Jump to navigation Jump to search 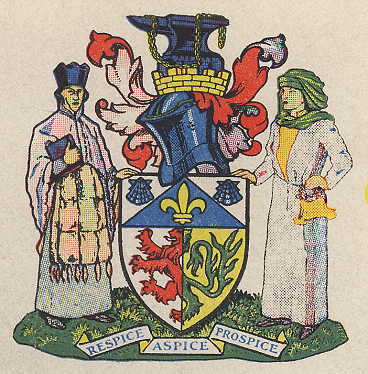 Arms : Per pale Argent and Or a Lion rampant double queued per pale Gules and Vert a Chief per pile reversed of the first and Azure thereon in chief two Escallops Sable and in base a Fleur-de-Lys of the second.
Crest : Out of a Mural Crown Or an Anvil Sable the beak encircled by a Chain reflexed over the face Gold.
Supporters : On the dexter side a Canon of the Premonstratensian Order holding in the exterior hand a [closed] Book and on the sinister side a Gentleman habited in costume of the fifteenth century all proper.
Motto: 'RESPICE ASPICE PROSPICE' - Look to the past, the present and the future

The arms were officially granted on September 16, 1937.

The shield is composed of emblems representing the principal owners of the Manor of Hales. The red half of the lion represents Earl Roger of Montgomery (1066-1094) and the green half, Robert Dudley, Earl of Leicester (1555). The fleur-de-lis refers to the Premonstratension Canons (1218-1538) and the scallops, the Lyttleton family, who have held the manor since 1559.

The crest refers to the iron and steel industries and the chain making industry of Cradley.