From Heraldry of the World
Your site history : Hanau
Jump to navigation Jump to search 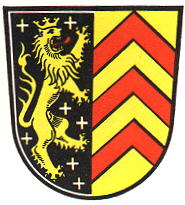 The arms are based on the oldest seal of the city. Hanau was granted city rights in 1303 and the oldest seal is known since 1354. It shows the lion and chevrons of the Lords of Hanau-Dorfelden.

The arms were slightly changed during the centuries and in 1538 the small crosses were added.

The present arms were granted in 1905 and at the time included a swan as crest. Currently the city uses again the crest, which is not officially granted.