From Heraldry of the World
Your site history : Harrogate
Jump to navigation Jump to search 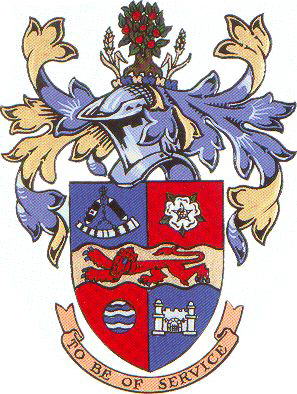 Arms : Quarterly Azure and Gules on a Fess wavy Or between in chief to the dexter the Ripon Horn straps and chains Or and to the sinister a Rose Argent barbed and seeded proper and in base to the dexter a Roundel barry wavy Argent and Azure and to the sinister a double towered Castle Or a Lion passant guardant Gules.
Crest : On a Wreath of the Colours an Apple Tree fructed proper between two Stalks of Wheat all Or.
Motto: 'TO BE OF SERVICE'.

The new arms are quartered like Harrogate's old arms (see below). Three of the quarters are charged with symbols of the towns merged in the new district. The hunting horn is the ancient horn of the City of Ripon, which featured in the unofficial arms of the city. The fountain is for Harrogate, a famed spa resort. The castle is for Knaresborough.

In the other quarter is a white rose to show the district lies in Yorkshire. Across the centre is a wavy fess suggesting the rivers of the area. The royal lion upon the bar represents the Royal Forest of Knaresborough. The crest depicts the agricultural produce of the rural areas of the district. A Ribston Pippin Apple tree stands between two ears of wheat. 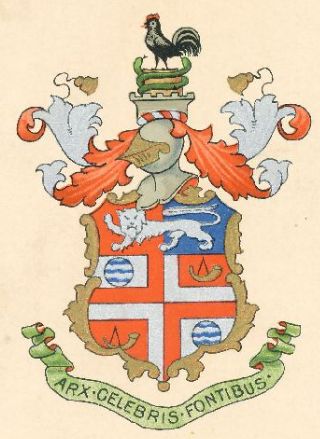 Arms : Quarterly argent and gules, a cross counterchanged netween in first and fourth quarters a fountain proper and in the second and third a bugle horn stringed Or; on a chief per pale of the second and azure a lion passant guardant of the first.
Crest : On a wreath of the colours, out of the battlements of a tower a trunk of a tree erect entwined by two serpents respecting each other proper, surmounted by a cock sable, combed and watted gules.
Motto: Arx celebris fontibus

The arms were officially granted on November 8, 1884.

The heraldic fountains or roundels of wavy silver and blue bars represent Harrogate's many medicinal springs. The gold buglehorns with gold strings are from the arms of Sir William Slingsby, of Scriven Park, who discovered the first spring, the Tewitt Well, over three hundred years ago, and so was instrumental in bringing prosperity to the town. The silver lion on the red and blue chief, denotes that this fashionable Yorkshire Spa has been favoured with the visits of Royalty.

The tower battlements are emblems of local government, and these are in natural colouring, as also are the tree trunk and serpents. The black cock with red wattles and comb is suggested by a device upon a banner granted by King Louis XI of France to a corporation of physicians about the middle of the 15th century, and has reference to the healing qualities of the Harrogate waters, as do the serpents.