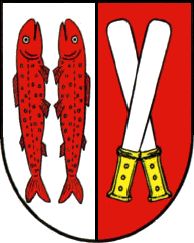 The arms are a combination of the arms of the three former districts; the shield division of Halberstadt; the fish from Wernigerode and the two knives from Quedlinburg.