From Heraldry of the World
Your site history : Hasselbach (Taunus)
Jump to navigation Jump to search 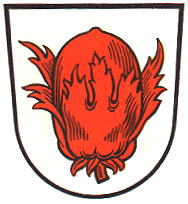 The arms were officially granted on December 9, 1937.

The arms show a canting hazel nut (Haselnuss). The nut already appeared on the oldest known seal of the town, dating from 1529. Since 1816 the nut is also used as arms of the town, but the arms were only officially granted in 1937.

The silver and red are the colours of the State of Trier, to which the town belonged in the 15h century. The Archbishops of Trier also granted city rights in 1442.