From Heraldry of the World
Your site history : Hausgereut
Jump to navigation Jump to search 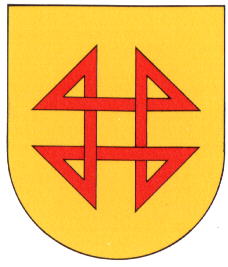 Hausgereut became an independent municipality only in 1844 and thus had no historical seals or arms. The village had a village symbol, which was used on borderstones and can also be found on the bell in the local church, made in 1749, see image below. 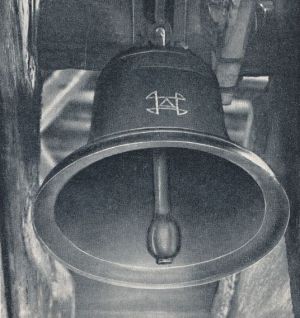 The new municipality thus adopted this sign on its seal. But in 1895 the municipality adopted arms, showing a black eagle in a silver field, with a small red inescutcheon with a black letter H. These arms were never officially granted. The eagle was (wrongly) seen as the arms of the County Hanau-Lichtenberg, to which the area historically belonged. The inescutcheon showed the town's initial.

After the Second World War the village again adopted the village symbol on its seal and arms. It took, however, until 1961 before the arms were officially granted in the colours of Baden.

Most village symbols in Baden were composed of geometrical patterns, without any specific meaning, except to be distinct from those of neighbouring villages. The meaning thus is not known, although the municipality in 1961 explained the symbol as a kind of map of the village streets, with the triangles symbolising houses.