From Heraldry of the World
Your site history : Helden (Attendorn)
Jump to navigation Jump to search 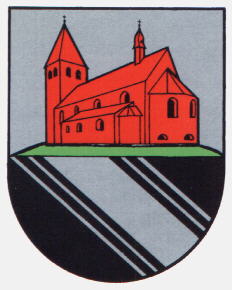 The upper part of the arms shows the local church. The church of Helden was founded in the 11th century and is thereby one of the oldest churches in the region. The base shows the arms of the Von Helden family, who originated from the village and had their estate in Helden.