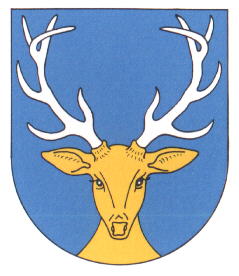 The oldest known symbol for the village is a goose-foot, used on the borderstones of the village in 1760. In the 19th century the foot was placed on the local seal.

In 1902 the village council applied at the State Archives for a different symbol to be used on its arms. The Archives thus proposed a swan's foot instead, for a swan was used by the Counts of Hanau-Lichtenberg as crest on their arms. The village belonged to the family for a long time. The local council did not approve of the new design and finally the above arms were adopted. Their meaning is not known, but most likely the arms are derived from the arms of the Gayling von Altheim family, who acquired the village in 1751.