From Heraldry of the World
Your site history : Hexham
Jump to navigation Jump to search 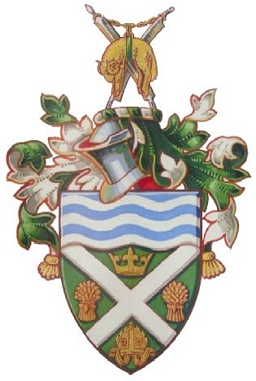 Arms : Vert a Saltire Argent between in chief an Ancient Crown in base a Mitre and in fess two Garbs Or a Chief wavy barry wavy of six Azure and of the second.
Crest : On a Wreath of the Colours a Fleshing Knife and a Beam Knife in saltire proper the upper handles joined by a Chain Or pendent therefrom a Fleece Gold banded Vert.

The wavy blue and white chief refers to the River Tyne, that forms the town's northern boundary. The saltite refers to the dedication of Hexham Abbey, that since the Dissolution of the Monasteries in 1537, has been the parish church of Hexham. The green field and sheaves refer to agriculture and the mitre to the former Bishopric of Hexham.

The crest refers to the fact that Hexham had been long famous for its manufacture of leather, together with tanning and other allied industries.

The arms are currently used by the Hexham Town Council.