From Heraldry of the World
Your site history : Hillingdon
Jump to navigation Jump to search 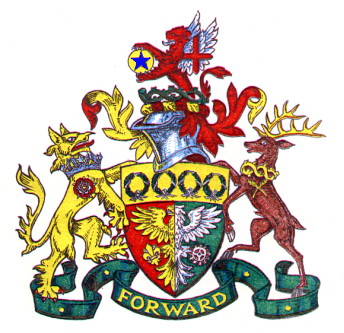 Arms : Per pale Gules and Vert an Eagle displayed per pale Or and Argent in the dexter claw a Fleur-de-Lys Or and in the sinister claw a Cog-Wheel Argent on a Chief Or four Civic Crowns Vert.
Crest : On a Wreath of the Colours issuant from a Circlet of Brushwood Sable a demi-Lion Gules with wings Argent the underside of each wing charged with a Cross Gules and holding between the paws a Bezant thereon a Mullet Azure.
Supporters : On the dexter side an Heraldic Tiger Or gorged with an Astral Crown Azure and charged on the shoulder with a Rose Gules charged with another Argent barbed and seeded proper and on the sinister side a Stag proper attired and gorged with a Circlet of Brushwood and charged on the shoulder with two Ears of Rye slipped in saltire Or.
Motto: 'FORWARD'.

The silver half of the eagle on a green field and the gold half on a red field are taken from the arms of the Yiewsley and West Drayton UDC and the Borough of Uxbridge respectively. In both cases the eagle was taken from the arms of the Paget family. The Manor of West Drayton was given to Sir William Paget, the first Lord Paget, by Henry VIII In 1547 and the Paget family subsequently also owned the Manors of Harmondsworth and Dawley. Henry Paget, the seventh Lord Paget, was created Earl of Uxbridge in 1714. The eagle, being an heraldic symbol of flight, is also used as an allusion to Heathrow Airport, the Royal Air Force Depot at Uxbridge and Northolt Airport. The cog-wheel comes from the arms of the Hayes and Harlington UDC and refers to the many modern industries in the district. The fleur-de-lys is from the arms of the Ruislip-Northwood UDC and represents the lily symbol of purity of St. Mary, one of the saints to whom the Abbey of Bec in Normandy and King's College at Cambridge were dedicated. The four civic crowns of oakleaves and acorns refer to the four former authorities.

The red half-lion is from the Uxbridge crest and represents the British national lion and the wings with St. George's cross are derived from those in the Yiewsley and West Drayton crest. The blue star on a gold roundel shows in reversed colours the North Star from the Ruislip-Northwood arms, here it is now also to be regarded as a reference to the airports by virtue of the use of the North Star in visual navigation. The black circlet of brushwood is from the Hayes and Harlington crest, in reference to the derivation of the name Hayes.

The tiger is one of the supporters of the former Uxbridge arms and is taken from the heraldry of the Earl of Uxbridge, whose chief title is Marquess of Anglesey. The blue astral crown alludes to Uxbridge's connection with the Royal Air Force. The Tudor Rose is from the Yiewsley and West Drayton crest, where in combination with the wings it represented the arrival of Queen Elizabeth II by air when she first set foot on British soil after her accession. It is also an English Royal Badge. The stag with circlet of brushwood comes from the Hayes and Harlington crest and refers to the time when a large part of the area was wooded. The two ears of rye 'slipped' are from the Ruislip-Northwood crest and are a punning reference to the name Ruislip.

The seven pointed star of the badge represents the seven districts - Harlington, Hayes, Northwood, Ruislip, Uxdridge, West Drayton and Yiewsley united in to one London Borough (the red mural crown) surrounded by the Green Belt (the green roundel).