From Heraldry of the World
Your site history : Hirschhorn (Neckar)
Jump to navigation Jump to search 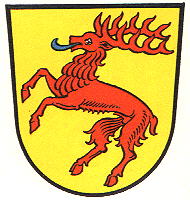 The arms were granted in 1930 and are based on the colours of Hupp. The arms were later confirmed on August 5, 1964.

Hirschhorn is named after the Lords of Hirschhorn, who developed the town and granted city rights in 1391. The oldest seal does no longer exist, but a seal dating from 1418 shows already a canting deer (Hirsch). The deer is lying and is not placed on a shield.