From Heraldry of the World
Your site history : Hobart
Jump to navigation Jump to search 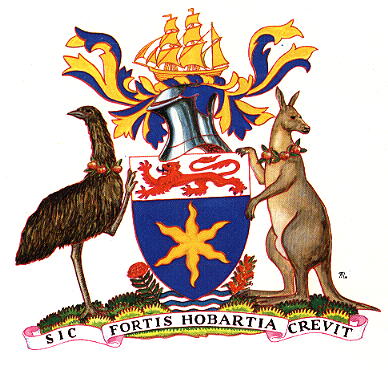 Arms : Azure, an Estoile Or, on a Chief Argent a Lion passant Gules.
Crest : On a Wreath Argent and Azure a three­-masted sailing Ship (representing the Flying Childers) in full sail Or. Mantling Azure, doubled Or.
Supporters : On the dexter side an Emu and on the sinister side a Kangaroo both reguardant and each gorged with a chaplet of Apples leaved all proper.
Motto: 'Sic Fortis Hobartia Crevit'.

On the shield the red lion comes from Tasmania's flag badge, and also the crest of the State Arms. The estoile recalls the arms of Captain James Cook, first European to reach the eastern coast of Australia, although Abel Tasman, a Dutchman, was the first to land in Tasmania.

The supporters are the same as those in the National Arms, although here they have changed sides, and are each looking over their shoulder. The chaplets of apples round their necks refer to the state's nickname 'the Apple Isle', as so many are grown in the Hobart district.

The ship on the crest is the Flying Childers, built in Hobart by John Watson in 1847. It was used as a whaling ship, then in coastal trading, and finally trading overseas until its loss in 1870. It represents the importance of shipping to Hobart's growth. The waratah in the compartment is the species found in Tasmania, and is smaller than those on the mainland.