From Heraldry of the World
Your site history : Hornsey
Jump to navigation Jump to search 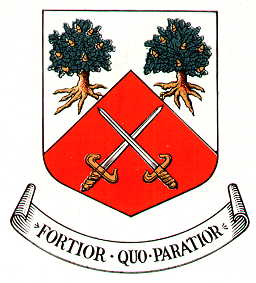 Arms : Per chevron Argent and Gules in chief two Oak Trees eradicated and in base two Swords in saltire proper the latter pommelled and hilted Or.
Motto: 'FORTIOR QUO PARATIOR' - The stronger because the more prepared

The oak tree are symbolic of Hornsey's former state as part of the old forest of Middlesex, while the crossed swords of St. Paul are from the arms of the See of London with which Hornsey was connected.