From Heraldry of the World
Your site history : Houtvenne
Jump to navigation Jump to search 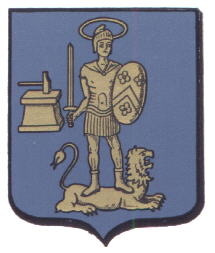 The arms are based on the oldest seal of the local council, known from the 18th century, show the local patron saint, St. Adrianus. He is dressed as a Roman soldier, with an lion and anvil, his symbols. He holds a small shield with the arms of the Blereau family, lords of the manor since the family acquired the manor in 1685.