From Heraldry of the World
Your site history : Houwaart
Jump to navigation Jump to search 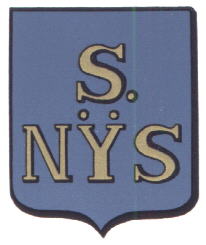 The Estate of Houwaart has had many different Lords of the Manor during the centuries, but the local council did not have its own seal until the 18th century. The seal showed the patron saint of the village, St. Denis. When the arms were granted in 1868 the council did not apply for the saint itself but for his name, the letters S (Sint) and NŸS (Denijs).