From Heraldry of the World
Your site history : Hrastnik
Jump to navigation Jump to search 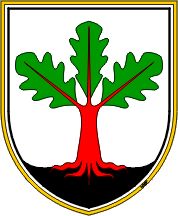 The arms are canting, showing an oak tree, as hrast is the Slovenian word for oak. The black base symbolises the minerals that are mined in the region. The red trunk symbolises the revolutionary past of the town.

The previous arms were adopted around 1980. 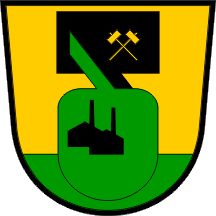 The arms show symbols for mining and glass manufacture, the two main industries at the time. The golden field also forms the town's initial letter H. Sometimes a chief was used with a red five-pointed star and the name of the community. After independence of Slovenia the chief was deleted, and in 1992 the emblem was adapted for use on car licence plates, but was then soon replaced with the current arms.