Incorporated into : 1965 Huntingdon and Peterborough (1974 Cambridgeshire) 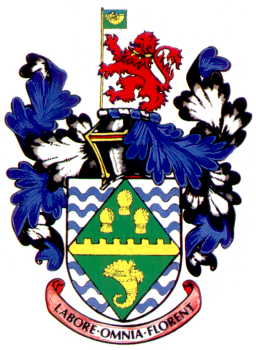 Arms : Barry wavy of twelve argent and azure, a lozenge vert, its points touching the edges of the shield, charged with a fess embattled between in chief three wheatsheaves and in base a cornucopia, all gold.
Crest : On a wreath argent and azure, a lion rampant gules with a collar of fleurs-de-lis lying alternate ways, supporting a staff proper and thereon a banner vert charged with a gold hunting horn with gold strings.
Motto: LABORE OMNIA FLORENT (All things prosper by industry)

The arms were officially granted on April 9, 1937.

Between this is an embattled fess standing for the old fortified town of Huntingdon. The silver and blue waves of the background are for the county's many waterways, in particular the River Ouse.

The crest has a red Scottish lion with a fleury counter fleury collar resembling the tressure in the arms of that country. The Kings of Scotland were also earls of Huntingdon.

The lion supports a banner with a hunting horn, from the seal of Huntingdon and also for the ancient forests of the area.

The arms were continued by the newly formed Huntingdonshire (District) Council.