From Heraldry of the World
Your site history : Husum (kreis)
Jump to navigation Jump to search 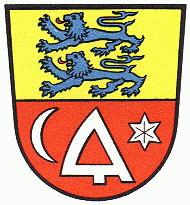 The lions in the upper part are the lions of the former County Schleswig, and do also appear in the arms of the city of Husum, as well as of the island Pellworm.

The lower part shows a plough-iron, which was the symbol of the two predecessors of the Kreis, Süder- and Nordergoosharde. The moon and star also appeared in the seal of the latter.