From Heraldry of the World
Your site history : Idegem
Jump to navigation Jump to search 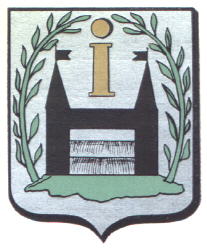 The local council applied to the Dutch authorities to obtain the right to use these arms. However, no explanation was given. As no historical seals or arms were known for the village, the arms were granted. The arms show the local lock in the Dender river and the town's initial and were probably devised in 1813. After the Belgian independence in 1830 the arms were confirmed.