From Heraldry of the World
Your site history : Ilford
Jump to navigation Jump to search 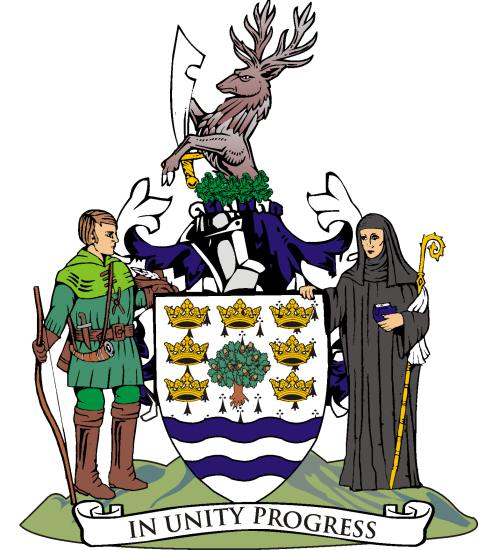 Arms : Ermine an Oak Tree eradicated and fructed proper surrounded by seven Crowns Or in base waves proper.
Crest : On a Wreath Argent and Azure issuant from a Chaplet of Oak a demi Buck supporting between the legs a Seax proper pomel and hilt Or.
Supporters : Dexter a Forester holding in the exterior hand a Bow proper sinister a Female figure habited as an Abbess and holding in the exterior hand a Book proper.
Motto: 'IN UNITY PROGRESS'

The water in base refers to the town's name Ilford. This means ford across the Hyle, the local name for the River Roding. The main charge is an oak tree, representing the Fairlop Oak in Hainault Forest. The seven crowns refers to the district of Seven Kings. this was reputed to be the meeting place for the Kings of the Heptarchy or seven kingdoms of Anglo-Saxon England.

The forests that anciently covered much of the area are represented in the crest by the buck and oak leaves. The buck supports a seaxe from the arms of Essex County Council, to show that Ilford is in Essex. The left hand supporter is a forester, the right hand a Benedictine Abbess. The latter represents Adeliza, Abbess of Barking, who founded a chapel in Ilford in 1145.