From Heraldry of the World
Your site history : Immichenhain
Jump to navigation Jump to search 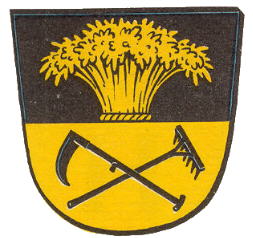 The arms show a golden garb with a rake and scythe. The image is based on the seal of the village dating from 1800. The meaning of the elements, which were used in many more municipalities in the Ziegenhain region, is not known, they may simply refer to the rich agriculture in the region. Compare for example : Berfa, Asterrode, Riebelsdorf, Röllshausen, Rückershausen and Görzhain.