From Heraldry of the World
Your site history : Irlam
Jump to navigation Jump to search 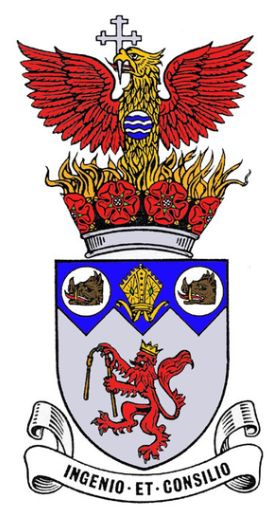 Arms : Argent, a lion rampant gules crowned with an ancient crown Or, holding in the forepaws a flail proper; on a chief indented of three points azure a mitre also Or between two plates each charged with a boar's head couped sable armed Or.
Crest : Out of a coronet composed of six roses gules, barbed and seeded proper, set upon a rim argent, flames proper, issuant therefrom a demi-eagle Or, wings diplayed gules charged on the breast with a fountain and holding in the beak a cross crosslet fitchy erect also argent.
Motto: 'INGENIO ET CONSILIO'

The red lion on a white field is from the arms of the de Hulton family, of Hulton and Farnworth, a branch of the Bartons. The flail is from the crest of the de Trafford family and also represents the district's agricultural concerns. The mitre refers to Stanlaw Abbey, which held Cadishead, from Edith de Barton from the 13th century until the dissolution. The boars' heads are from the arms of the Bartons, who held sway of both Cadishead and Irlam from the 13th century.

The red roses refer to Lancashire and the Eagle holding a cross crosslet fitchy in its beak is from the crest of the 19th century Greaves family, of Irlam Hall, the most prominent family of the district. The fountain on its breast represents the rivers Mersey and Irwell and the Ship Canal.