From Heraldry of the World
Your site history : Islington
Jump to navigation Jump to search 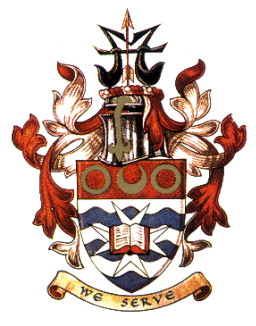 Arms : Barry wavy Argent and Azure a Maltese Cross Argent surmounted by an open Book proper edged and on a chief Gules a Crescent between two Annulets Or.
Crest : On a Wreath Argent and Gules in front of a Water Bouget Sable an Arrow erect proper barbed and flighted Argent.
Motto: 'WE SERVE'

The arms were officially granted on February 3, 1966.

The lower part of the shield is for Finsbury. The silver and blue wavy field refers to the River Thames and the New River.

The Maltese Cross is taken from the insignia of the Order of St. John. The Order's headquarters were at St. John's Gate. The open book is for Charterhouse School.

The chief is for Islington. The water bouget comes from the arms of the Berners family. The arrow recalls the long tradition of archery in Islington, when it was an open area north of London. 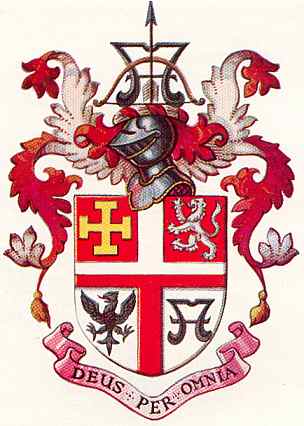 Arms : Per fesse Gules and Argent a Cross countercharged between a Cross potent Or in the first quarter a Lion rampant Argent in the second an Eagle displayed in the third and a Water-Bouget in the fourth both Sable.
Crest : On a Wreath of the Colours in front of a Water-Bouget Sable a long Bow stringed fessewise and Arrow erect proper.
Motto: 'DEUS PER OMNIA' - God pervades all things