From Heraldry of the World
Your site history : Islwyn
Jump to navigation Jump to search 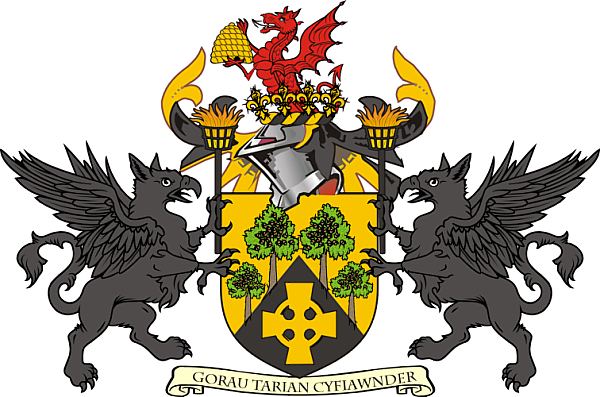 Arms : Per chevron Or and Sable in chief four Oak Trees issuant fructed proper and in base the Head of a Celtic Wheelcross.
Crest : On a Wreath of the Colours in front of a demi Dragon Gules holding a Beehive Or four Fleur-de-Lys Or.
Supporters : On either side a Griffin holding aloft in the interior forefoot a Cresset Sable enflamed proper.
Motto: 'GORAU TARIAN CYFIAWNDER' - The best shield is justice

The Celtic wheel cross represents the ancient settlement and church of Mynyddislwyn. The per chevron division represents a mountain or "Mynydd". From the mountain grows a grove of four oak trees. "Islwyn" means below the grove. The four armed cross and four trees remind us that four councils merged to form the new Borough. The black colouring is for coal mining, the gold for agriculture.

The four fleurs de lys in the crest, taken from the Monmouthshire County Council arms, show that the union of four Gwent councils. The red dragon holding a beehive stands for a Welsh industrial area.

The supporters are black griffins, from the arms of Morgan of Penllwyn. They hold cressets as difference and to suggest the blast furnaces and foundries of the district.