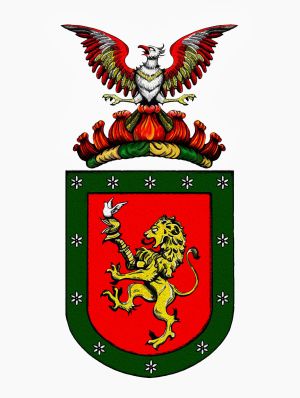 Arms: Gules, a lion rampant the dexter foreleg armed the gauntlet grasping an helm Or with crest a dove Argent; on a bordure Vert twelve flowers each with six petals Argent.
Crest: A phoenix Proper.

This Armorial Achievement represents the Armiger's heritage, legacy, and values. The yellow and green colours of the torse allude to the Armiger's family presence in Brazil since colonial times, while the green and red shield refers to the Armiger's Portuguese ancestry. The phoenix references the Armiger's family as members of the Gente da Nação (or, the Western Sephardic community), "who survived the Iberian Inquisitions of the 15th century and fled to the New World in the aftermath". On the shield border, the 12 flowers against a green field represent the 12 Tribes of Israel and the undying hope for Redemption from Exile. Within the shield, the lion with an armoured arm supports a knight's helmet with a dove atop – this is an amalgamation of the ancient symbols carried by the Armiger's family throughout their Diaspora – from Portugal to the Netherlands, Brazil, the United States of America, and France.
This Armorial Achievement celebrates the Armiger's family history of resilience against insurmountable destruction in the form of pogroms, expulsions, and wars. As the Armiger's ancestors found refuge in distant lands throughout the Mediterranean and across the Atlantic, they achieved great accomplishments as transnational merchants until the 18th century, and later as members of the Armed Forces, Politics, Academia, and the Fine Arts in the Americas and Europe.
The armiger has chosen to follow a lexicon of classic heraldry, invented by romantic Victorian writers, to add some meaning and classic values to the composition of his achievement: red, to project strength, magnanimity, and all attributes of a true warrior; green, to possess hope, joy, and give loyalty in love; gold, to keep a spirit of generosity, and an elevated mind; the lion, to hold steadfast bravery, strength, ferocity, and a sense of valour; the armoured arm of the lion, to have the qualifications of a leader ; the knight's helmet, to possess wisdom, protection, and a sense of invulnerability; the dove, to be a keeper of constancy and peace; the flowers, to further emphasize the need for a deep sense of hope.